According to findings from the 2013 edition of Semicast’s Embedded Processing Service, the outlook for Power Architecture in embedded processing looks limited, with its long term future now almost entirely dependent on Freescale.

The market for Power Architecture-based embedded processors is judged to have peaked in 2007 at just under $4 billion. Power Architecture had benefitted from a clean sweep in games consoles, with design-wins in the Microsoft Xbox 360, Nintendo Wii and Sony PlayStation 3 and revenues grew strongly in 2007 as production of the new consoles ramped up. However then followed the economic downturn of 2008 and 2009, and as production growth slowed but the year-on-year price erosion of the processors continued, so revenues for Power Architecture in games consoles steadily declined. The processor selection for the forthcoming generation of games consoles would suggest that the best days for Power Architecture in embedded processing are in the past. Console specifications show that Microsoft and Sony have changed to x86-based processors with integrated graphics processing unit (GPU) in the Xbox One and PlayStation 4 respectively, with each using broadly the same technology from AMD. In effect both companies have adopted a “PC-lite” architecture for their new consoles, combining a step up the performance curve with significantly reduced development timescales and costs for games developers, who historically have had to support both PCs and consoles. This leaves Nintendo’s Wii U as the only console in the new generation not based on the x86 architecture, and splits the gaming market in two; PC, Xbox One and PlayStation 4 in the x86 camp; Wii U alone with Power Architecture. When Nintendo introduced the original Wii in 2006, its fun games and motion sensitive controllers were a significant departure from gaming convention at the time and sales of the Wii soared as a result. However since then, many of these features have been supported by games on tablets. Semicast’s opinion is that Nintendo is not just architecturally isolated (increasing the possibility of some game developers not supporting Wii U at all), but also exposed to the rising complexity of games on tablets and smartphones, where game prices are closer to 49 cents than 49 dollars. At the extreme, Nintendo could even be at risk of going the way of Sega. Freescale remains the largest supplier of Power Architecture-based microcontrollers and embedded microprocessors, primarily supporting applications in the automotive, communications and industrial markets. However Freescale is steadily embracing the ARM architecture in all three of these markets, and it is surely only a matter of time before Freescale succumbs to market forces and slows development of its Power Architecture lines. Colin Barnden, Principal Analyst at Semicast Research and study author, commented “ARM is already the leading processor architecture in both the automotive and industrial markets, while availability of processors based on the 64-bit Cortex A53 and A57 cores is forecast to establish ARM in the communications infrastructure market, in competition with Power Architecture, MIPS and x86”. Semicast forecasts the market for Power Architecture-based embedded processors will fall to less than $2 billion in 2018, with ARM and x86 the main beneficiaries of Power Architecture’s decline.
Ad

HCL & Broadcom expand their preferred services partnership
Morrow Batteries to build the first giga battery cell factory in Norway Morrow Batteries says it will build battery cell production in Norway in order to meet increasing market demand and lead the drive for more sustainable batteries.
Groupe PSA and Punch Powertrain team up on electrification Groupe PSA and Punch Powertrain have signed an agreement to establish a second Joint Venture and expand their strategic partnership in the field of electrification, to contribute to fight against climate change.
Aspocomp starts phase two of its plant investment in Oulu Finnish PCB manufacturer company Aspocomp, has been granted a total of EUR 1.35 million in development support by the ELY Center for the implementation of the second phase of its Oulu plant investment.
Sponsored content by Würth Elektronik eiSos
Single Pair Ethernet for the industry Würth Elektronik presents a filter design for single-pair Ethernet interface. SPE is now useful for industrial applications.
Ad 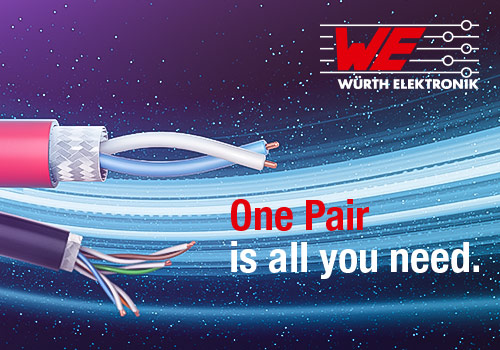 Global semiconductor sales down 1.2 percent in April 2020 Global semiconductor sales in April 2020 were USD 34.434 billion, up 6.1% versus the same month in 2019, says the European Semiconductor Industry Association (ESIA).
Cobham RAD sold to Radiation Test Solutions Cobham Advanced Electronic Solutions says that it has sold its Cobham RAD radiation testing business in Colorado Springs, to Radiation Test Solutions, Inc. (RTS).
Construction starts at Kyungshin new factory in Serbia The South Korean automotive company has initiated the construction of its new facility in the municipality of Smederevska Palanka in Serbia – once completed 700 new jobs will be created.
Manz is expanding within its contract manufacturing segment The German engineering company says it is registering lively interest in contract manufacturing from a wide range of industries. Manz is thus further expanding its business in the contract manufacturing segment at its locations in Slovakia and China.
Celestica to manufacture ventilators for the Canadian market EMS provider Celestica has won a program to build 7,500 ventilators for StarFish Medical Inc., a Canadian medical device company, at Celestica’s operation in Newmarket, Ontario.
Ouman Estonia starts an expansion project Despite the current uncertain economical environment, Ouman says it believes in a brighter future and that the company is proud of the performance in its factories.
Reshaping production post COVID-19 As manufacturers re-open after COVID-19 related lockdowns, economic and supply chain disruptions may be felt beyond 2020. How companies shift in the short-term and plan for the long-term will be factors in defining “new normal” for the component industry.
Swedish EG Electronics acquires WEAB EG Electronics AB, a KAMIC Group company, has acquired all the shares in WEAB, Wermlands Elektronik AB.
ZF completes its acquisition of WABCO ZF Friedrichshafen AG has successfully completed the acquisition of commercial vehicle technology supplier WABCO, having gained approval from all required regulatory authorities.
Romanian EMS provider expands as it relocates Romanian EMS-Electra has successfully finalised the process of relocating to a new building, in the industrial area of Iasi, Romania.
Circuit Check partners with major healthcare company to build ventilators In early March, when a long-standing customer to the company, a major healthcare company approached Circuit Check to partner together to build over a dozen tests systems to assist in the COVID-19 efforts, Circuit Check responded quickly to the challenge.
TI maintains firm grip as world's top analog IC supplier TI's 2019 analog marketshare grew to 19% and ST climbed to fourth place as the top-10 suppliers collectively accounted for 62% of total analog sales.
Big Ass Fans adds third Hentec/RPS machine Complementing the purchase of two Hentec Industries/RPS Automation Vector 300 selective soldering machines in 2018, Big Ass Fans (BAF), a high-volume, low- speed (HVLS) airflow manufacturer, has just added a third machine to its factory in Newman Lake, Washington.
CE3 Electronics Inc. taps MIRTEC for 3D AOI technology Canada-based CE3 Electronics has purchased a MIRTEC MV-6 OMNI 3D AOI machine.
Gémosz is still looking to grow – but the pandemic brought new perspectives Winston Churchill famously said, “Never let a good crisis go to waste”. While this was said in a vastly different context than the current crisis of the COVID-19 pandemic, there is still truth to the fact that a crisis not only allows for change – but sometimes forces it.
North American PCB industry sales up 4.3% in April The IPC says that total North American PCB shipments in April 2020 were up 4.3% compared to the same month last year. Compared to the preceding month, April shipments fell 18.2%.
Volkswagen intensifies e-mobility activities in China Volkswagen has initiated the next chapter for its business in China. The automotive giant plans to increase its share in JAC Volkswagen, its joint venture for e-mobility.
GPV Selects Aegis as global smart factory partner Driven originally by accelerating customer expectations for traceability, GPV has selected Aegis’ FactoryLogix Smart digital manufacturing solution, targeting multiple values and benefits.
REDCOM EMS expands certification for medical device manufacturing New York-based REDCOM EMS has secured ISO 13485:2016 certification, complementing the company’s existing ISO 9001:2015 and AS9100D certifications.
Ozark Integrated Circuits nabs U.S. Air Force grant Arkansas-based Ozark Integrated Circuits Inc., located in the Arkansas Research and Technology Park at the University of Arkansas, has received a USD 750,000 award from the U.S. Air Force.
Load more news
Most Read
Evertiq New Media AB