Risks are back on the radar in emerging countries

Despite resilient growth, estimated at 5.1% in 2013, and improved sovereign and external fundamentals, emerging country risks have not disappeared altogether, but have changed form.

Three major risks now weigh on emerging markets: Rising political instability risk, fed by growing frustration, but also by the marked capacity to translate these frustrations into action The wave of revolutions in the Arab world revealed new political, cultural and institutional demands in emerging societies. To analyse a society’s capacity for political fracture, Coface has created an interpretive lens with two types of indicators: pressures for change (inflation, unemployment, control of corruption, etc.), which measure the intensity of socio-political frustration in a given country, and the instruments for realising change (education, social networks, percentage of young people in the population, the role of women, etc.), which capture the society’s capacity to transform these frustrations into political action. 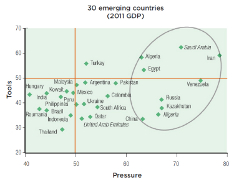 Of the 30 emerging countries examined, North Africa and the Middle East regions stand out clearly by the presence of both strong pressure and instruments for change. This analysis points to the persistent nature of the risk of instability in the region, especially where post-revolutionary regimes have proven incapable of meeting the demands of their populations, which put them in power in the first place. Nigeria, Russia, Kazakhstan and China all show frustration levels above or equal to the situation in Tunisia and Egypt, but with fewer instruments for change, a situation which limits their capacity to transform frustration into radical political change. Increasing protectionism, potentially problematic for business Since 2008, capital controls and protectionism have become weapons of protection against forces outside the control of emerging economies. They also represent a risk for business. Note that Russia, Argentina, and to a lesser extent, India have by far the highest levels of protectionism, while Mexico, South Africa and Turkey remain relatively open to international trade. Massive recourse to restrictive measures can result in longer payment delays for importers, and more barriers to entry for companies exporting to these protectionist countries. While the effects seem limited for now on a global scale, they are expected to be exacerbated against a backdrop of increasing international division of production processes, with a negative impact on companies across the value chain. In addition, it is a trend that is likely to impact more on European countries seeking dynamic growth opportunities during a period when domestic demand remains depressed.

Rising risk of a credit bubble in emerging Asian markets Expansionist monetary policies in place in emerging economies since the 2008-2009 crisis and failures in prudential controls have generated sustained growth in bank credit, to the point of forming credit bubbles. Based on a summary indicator of credit bubbles comparing credit stock levels and credit growth, Coface estimates that emerging Asia is the region most at risk (Malaysia, Thailand and, to a lesser extent, Korea, China and Taiwan). While credit stock to the private sector in other countries is not as high, it is rising rapidly. Chile, Turkey, Russia and Venezuela are also experiencing, or close to experiencing, a credit boom. ----- The full report can be found here. / Images © Coface
Ad

North American PCB industry sales down 5.2% in January Total North American PCB shipments in January 2020 were down 5.2% compared to the same month last year.
Covid-19 forces Italian EMS to shut down plant Italian EMS provider MTA, a designer and manufacturer of electronic and electromechanical components for the automotive industry, has been forced to close its Codogno production plant following regulations set by the Italian Minister of Health.
Ericsson to close European offices amid virus outbreak The Swedish telecom company is shutting down three offices in three different European countries after one of its employees in Croatia tested positive for the novel Coronavirus.
Advanced Energy's manufacturing facility in Penang is operational Advanced Energy Industries expands its footprint with new facility in Penang, Malaysia to serve semiconductor and industrial customers.
FCA revs up support for the Motor City Fiat Chrysler Automobiles has released details on its planned expanded presence in Detroit, including the first new assembly plant within the city limits in almost three decades.
Apple issues revised ‘revenue guidance’ for March Apple has stated they do not expect to meet the previously announced revenue guidance for March quarter due to two factors associated with the COVID-19 global outbreak.
Lucid inks battery partnership with LG Chem Silicon Valley-based EV maker Lucid has finalized a partnership with LG Chem that will supply battery cells for standard versions of the Lucid Air through 2023.
Sono Motors to cooperate with Valoe on solar solutions Finnish technology company, Valoe Oyj, has signed a cooperation agreement with the Munich based Sono Motors GmbH to become a Technology Partner for the integrated solar components of the Sion, a Self-Charging electric car with solar integration.
Incap's 2019 revenues climbed 20% The Finnish EMS provider is entering its fiscal year 2020 on the back of a solid performance during 2019.
IPC survey: COVID-19 major cause of concern In a recent survey of electronics manufacturers and suppliers conducted between February 11-16, results released by IPC yesterday showed overwhelmingly that most “are concerned about the impacts COVID-19 will have on their business operations.”
Upgrades boost output for U.S. appliance maker GE Appliances has completed work on a USD 125 million factory upgrade to its refrigeration plant in Decatur, Alabama, which has included the installation of smart factory 4.0 technology.
TTM Technologies Inc. expands in Wisconsin TTM Technologies Inc. celebrated the grand opening of a new North American advanced technology center in Chippewa Falls.
Panasonic to exit US solar manufacturing Panasonic says it will begin to wind down U.S. production of photovoltaic cells and modules at Gigafactory New York in Buffalo, New York.
Techsil acquires adhesive supplier Glueline Adhesive and sealant supplier Techsil has announced that it has acquired Essex based adhesive stockist and distributor Glueline Ltd.
Neways 2019 turnover up while result is down While the company’s net turnover made positive developments during the business year 2019, Neways’ bottom line shows a sharp drop.
Eaton completes the acquisition of Power Distribution
Jabil cuts outlook in wake of virus outbreak EMS provider Jabil expects that the COVID-19 outbreak will have a negative impact on the second quarter of fiscal year 2020, relative to the company's previously set guidance.
Umicore starts construction in Poland The company has held a groundbreaking ceremony for the construction of its new cathode materials production plant in Radzikowice in Nysa in south-western Poland.
Swedish EMS provider expands with Finnish acquisition Swedish EMS provider Inission has signed an agreement to acquire 100% ownership of the Finnish manufacturer HY-Tech Comp Oy (HY-Tech).
Silfab Solar expanding, adding jobs in Washington The Washington State Department of Commerce and Port of Bellingham have announced that Silfab Solar will be expanding its operations in Bellingham.
Load more news
Most Read
Evertiq New Media AB