Question: What is a four-quadrant power supply?

Answer: A power supply that can sink and source on positive and negative currents and voltages. While simple voltage converters can generate a fixed output voltage from an input voltage, there are applications for which this behavior is not sufficient. An example is the control of a voltage node to which capacitors are connected These capacitors may be charged to any voltage. If they need to be brought to a lower voltage, they have to be partially discharged. Thus, in such an application, a power supply has to be able to source or sink current as required. Such a converter is called a four-quadrant dc-to-dc converter. For applications such as this, a power supply can be used with an output discharge function. It can discharge output capacitors quickly. Figure 1 shows such a function for a step-down switching regulator. Here, switch S2 is switched on for a lengthy period after the switching action of the buck converter is switched off and the output capacitor is discharged.

Figure 1. Discharge of an output capacitor via a simple output discharge function. An elegant way of controlling currents and voltages is with a four-quadrant dc-to-dc converter. A typical buck converter only operates in one quadrant. It can generate a positive voltage with a positive current flow; that is, current flowing from the dc-to-dc converter to the load. With a four-quadrant converter, not only can the output capacitors be discharged, but voltage can also be generated. This is possible because current can flow in the direction of the load or taken away from the load. That is the case in the previous example about quickly discharging output capacitors. A four-quadrant dc-to-dc converter can do even more than that. Besides generating voltages, it can also set the current to any level. This current can be positive or negative. Such four-quadrant converters are frequently used in universal lab power supplies. The user can, for example, test an LED using a fixed current setting. A solar cell can also be operated, with the four-quadrant converter acting as a load that sinks a predetermined current. 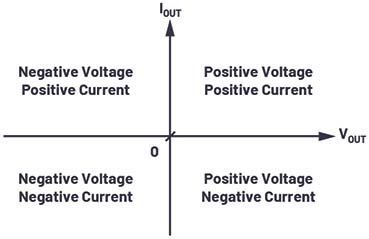 Figure 2. Four-quadrant voltage converter. Another interesting application is tinting window panes with LCD technology. This often requires a precisely set voltage in the positive and in the negative range to yield a suitable tint level depending on the available light and the desired brightness in the room. Figure 2 shows what four quadrant means in relation to a power supply. The quadrants of a coordinate system are shown with voltage on the x-axis and current on the y-axis. Current and voltage can be either positive or negative. The dc-to-dc converter can thus be used as an energy source and as an energy sink. In other words, the converter can function as a power supply or an electric load.