Question: Can I use a simple energy calculation when selecting a supercapacitor for a backup system?

Answer: The simple energy calculation will fall short unless you take into account the details that impact available energy storage over the supercapacitor lifetime. Introduction In a power backup or holdup system, the energy storage medium can make up a significant percentage of the total bill of materials (BOM) cost, and often occupies the most volume. The key to optimizing a solution is careful selection of components so that holdup times are met, but the system is not overdesigned. That is, one must calculate the energy storage required to meet holdup/backup time requirements over the lifetime of the application, without excessive margin. This article presents a strategy for choosing a supercapacitor and a backup controller for a given holdup time and power, considering the vagaries of supercapacitors over their lifetimes. Electrostatic double-layer capacitors (EDLC), or supercapacitors (supercaps), are effective energy storage devices that bridge the functionality gap between larger and heavier battery-based systems and bulk capacitors. Supercaps can tolerate significantly more rapid charge and discharge cycles than rechargeable batteries can. This makes supercaps better than batteries for short-term energy storage in relatively low energy backup power systems, short duration charging, buffer peak load currents, and energy recovery systems (see Table 1). There are existing battery-supercap hybrid systems, where the high current and short duration power capabilities of supercapacitors complement the long duration, compact energy storage capabilities of batteries. Table 1. Comparison Between EDLC and Li-Ion Batteries *To preserve reasonable lifetime It is important to note that higher temperatures and higher cell voltages in supercaps decrease a supercap’s lifetime. It is important to ensure that the cell voltages do not exceed temperature and voltage ratings, and that these parameters remain within desired operation levels in applications where supercapacitors are stacked or when the input voltage is not well regulated (see Figure 1). 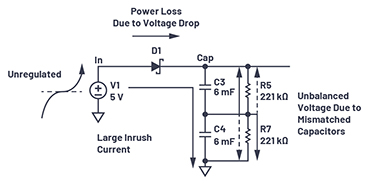 Figure 1. An example of an overly simple design resulting in a risky supercap charging scheme. It can be difficult to achieve a robust and efficient solution using discrete components. In contrast, integrated supercap charger/backup controller solutions are easy to use and typically provide most or all of these features: Selecting the Right Integrated Solution Analog Devices has an extensive lineup of integrated solutions that incorporate all necessary circuitry to cover the fundamentals of your backup system in a single IC. Table 2 summarizes the features of some Analog Devices supercap chargers. Table 2. Feature Summary of Integrated Supercap Charger Solutions *Can be configured for more than four capacitors For applications with 3.3 V or 5 V supply rails, consider: For applications with 12 V or 24 V supply rails, or if you require backup power beyond 10 W, consider: If your system requires a main buck regulator for 3.3 V or 5 V rails with a built-in boost converter for backup using a single supercapacitor or other energy source for temporary backup or ride-through, you should consider: Analog Devices also has many other constant current/constant voltage (CC/CV) solutions that can be used to charge a single supercapacitor, electrolytic capacitor, Li-Ion battery, or NiMH battery. You can find more supercapacitor solutions on analog.com. For more information on other solutions, please contact your local FAE or regional support. Calculating Holdup or Backup Time When designing a supercapacitor energy storage solution, how big is big enough? To limit the scope of this analysis, let’s focus on the classic holdup/backup applications used in high end consumer electronics, portable industrial equipment, energy metering, and military applications. A good analogy for this design task would be a hiker who wants to determine how much water to carry on a day-long hike. Less water at the start certainly makes going uphill easy, but he may run out of water too early, especially for a difficult hike. On the other hand, a hiker carrying a large bottle of water must endure the additional weight, but will likely stay hydrated throughout the duration of the trip. The hiker may also have to take weather into account: more water on a hot day, less when cool. Choosing a supercapacitor is very similar; holdup duration and load are important, as is ambient temperature. Furthermore, one must take into account the lifetime degradation of the nominal capacitance and the inherent ESR of the supercapacitor. Generally, the definition of the end-of-life (EOL) parameters for supercapacitors are: These two parameters are important to the following calculations. To size your power components, it is important to understand your holdup/ backup load specifications. In the case of a power failure, for example, the system might disable noncritical loads, so that energy can be shuttled to key circuits, such as those that save data from volatile to nonvolatile memory. Power failures come in many forms, but generally backup/holdup power must enable the system to gracefully shutdown in the face of a persistent failure or continue to operate through a transitory power failure. In either of these cases, the component sizing must be worked out based on the sum of the loads that requires support during backup/holdup and the time those loads must be supported. The amount of energy that is required to holdup or backup the system:

The stored energy in a capacitor:

Common sense design dictates that the energy stored in the capacitor must be greater than what is required for holdup or backup:

This approximates the size of the capacitor, but is not sufficient to determine the size for a truly robust system. Key details must be determined, such as the various sources of energy loss, which ultimately translate to greater required capacitance. Energy losses fall into two categories: those due to dc-to-dc converter efficiency, and those from the capacitor itself. 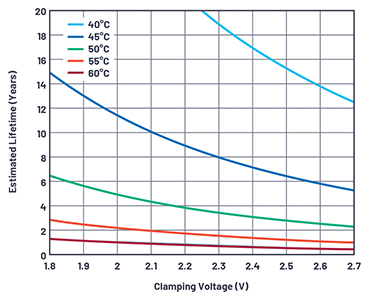 Figure 2. A diagram of lifetime vs. clamping voltage, using temperature as the key parameter. The efficiency of the dc-to-dc converter must be known for the condition where the supercapacitor is powering the load during holdup or backup. Efficiency depends on the duty cycle (line and load) conditions and can be obtained from the controller data sheet. The devices noted in Table 2 above have a peak efficiency of 85% to 95%, which can vary over the load current and duty cycle during the holdup or backup. Supercapacitor energy loss amounts to the energy we cannot extract from the supercapacitor. This loss is determined by the minimum input operating voltage of the dc-to-dc converter. This is dependent on the topology of the dc-to-dc converter and is called the dropout voltage. This is an important parameter to consider when comparing integrated solutions. Taking the earlier calculation for the energy of a capacitor and subtracting the energy unavailable below VDropout results in:

Maximum Power Transfer Theorem The third effect that must be taken into consideration is not so obvious: the maximum power transfer theorem. To obtain maximum external power from a supercapacitor source with an equivalent series resistance (see Figure 3), the resistance of the load must equal the resistance of the source. This article uses the words out, backup, or load interchangeably as all three mean the same thing in this case. Figure 3. Power delivery from a capacitor stack with series resistance. If we take the diagram in Figure 3 as a Thevenin equivalent circuit, we can easily calculate the amount of power dissipated across the load via:

To find the maximum power transfer, we can take the derivative of the previous equation and then solve for the condition when it is zero. This is the case when RSTK = RLOAD. 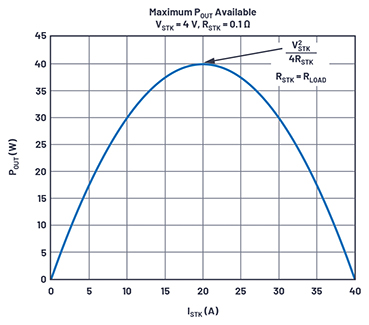 Figure 4. Curve of available power vs. stack current. There are implications with regard to the usable energy in a design. As the ESRs of the stacked supercapacitors are fixed, then the only value that varies during backup operation is the stack voltage and, of course, the stack current. To satisfy the backup load requirements, as the stack voltage decreases, the required current to support the load increases. Unfortunately, increasing currents beyond the defined optimum level reduces the available backup power, as it increases the losses in the ESR of the supercapacitors. If this effect occurs before the dc-to-dc converter reaches its minimum input voltage, it translates into additional loss of usable energy. 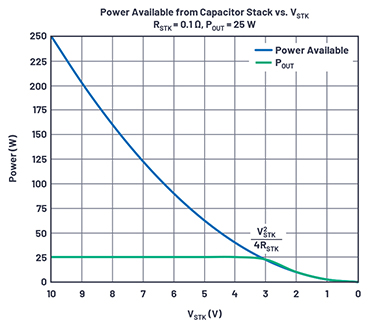 Figure 5. This diagram shows the derivation of minimum VIN required for certain output power. Figure 5 shows the available power as a function of VSTK, assuming an optimal resistance matching to the load, and the graph of 25 W of backup power. This graph can also be viewed as a unitless time base: as the supercapacitors satisfy the 25 W of required backup power, the stack voltage decreases as it discharges into the load. At 3 V, there is an inflection point at which the load current is beyond the optimum level, decreasing the available backup power for the load. This is the maximum deliverable power point of the system, and at this point, losses in the ESR of the supercapacitors increase. In this example, 3 V is significantly higher than the dropout voltage of the dc-to-dc converter, so unusable energy is due entirely to the supercapacitor, leaving the regulator underutilized. Ideally, the supercap reaches the dropout voltage, so the system’s ability to provide power is maximized. Taking the earlier equation for PBACKUP, we can solve for VSTK(MIN). Likewise, we can also take into consideration the efficiency of the boost converter and add it to this equation:

With this lower limit VSTK(MIN), we can establish a capacitor utilization ratio αB, which is derived from the maximum and minimum cell voltage:

Not only is the supercapacitor capacitance vital for determining the backup time, but the ESR of the capacitor is as well. The supercapacitor’s ESR determines how much of the stack voltage can be used for the backup load, also known as utilization ratio. As the backup process is a dynamic process in terms of input voltage, output current, and duty cycle, the complete formula for required stack capacitance is not as simple as the earlier versions. It can be shown that the final formula is:

where η = Efficiency of the dc-to-dc converter. Supercapacitor Backup System Design Methodology The concepts and calculations to this point can be translated into a supercap backup system design methodology: